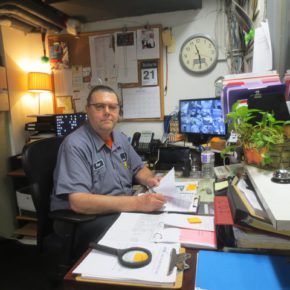 This is the first in a series of staff/shareholder profiles by the Communications Committee.  If you have any suggestions for the next one, please contact Georgia Sauer at GeorgiaSauer@aol.com.

Every shareholder at 3750 North Lake Shore Drive has no doubt heard “Ask Drago” when a question comes up about almost anything to do with living here.  Do you need a lost copy of a form? Ask Drago.  Do you need to send a package posthaste? Ask Drago. Is your computer acting up? Ask Drago.  Who reserves the hospitality suite?  Yes, it’s Drago.

Drago Simonovic  has been holding court in the basement receiving room since 1989, though he started here as a doorman 31 years ago in 1985.   An imposing man with a cheerful demeanor, no one gets past his watchful eye.  He’s the gatekeeper for the string of contractors coming and going and is a stickler for required paperwork, yet he still remains affable.

But did you know he also is a computer whiz, creating and tending the building’s website?  While in the beginning days of his employment, he delivered packages in the afternoon (which he still does), now he also delivers all of the building’s email correspondence. Seeing a need, he also started a small business center in the Receiving Room for shareholders.

He grew up on the Northside, where he still lives, at Devon and Western.  His father owned a laundromat at Grace and Ashland.  Though his parents divorced when he was young, he stayed in the area, attended Blaine Elementary School, and graduated from Lakeview High School. He has a sister who is a police officer and two brothers, one of whom has passed away.

Music is a huge part of his life.  He started playing guitar when he was 17 years old, and has been a member of a classic rock band ever since.  “The bands have changed over the years, but I started with a childhood friend and have always been in a band,” Simonovic said.  He has had gigs all over town including Metro on Clark Street.

It’s fun to chat with him about the building.   “I’m old school,” he said.  “When I started here, there were mostly older people, hardly any kids.  If someone needed something, we would do it for them.  We did a lot of special things for people in those days.”

He remembers the only fire in the building since he has worked here: it was on Thanksgiving Day 1985 due to a cooking mishap on the second floor.   “I wasn’t working that day, but Miro carried a shareholder down 16 flights of stairs,” he said.

If you’ve noticed a change in Drago, it’s because he’s lost 75 pounds- not surprisingly-the old fashioned way: “I cut out pasta and bread and eat lots of vegetables, lean meat and eggs,” he said.

We have a request for Drago:  please let us know the next time your band performs!