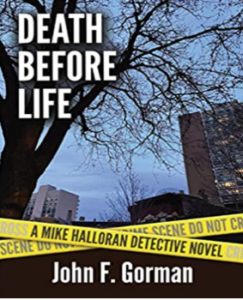 Have you ever tried to write a book? A short story? And it now sits somewhere, abandoned?

Our own John Gorman (4F), at the age of 78, pulled his book out of his desk drawer, blew it off, tweaked it, and got it published. It’s a searing who-done-it that tells a story from the fictional life of Detective Mike Halloran. And Halloran is John Gorman.

John’s life is that of the quintessential Chicago newspaper reporter. He lost his college basketball scholarship after getting into a brawl, eventually graduated, and wandered to India for the Peace Corps. Back in Chicago, he joined the legendary City News Bureau. Soon he had the overnight crime beat at the Tribune. Later, he was the first reporter on the scene when they started digging in John Gacy’s crawlspace.

Whatever big story broke on Chicago’s cops or in the courts, Gorman was there – and he’s got the stories to prove it. Twice at the Trib he and a small team of reporters were runners-up for the Pulitzer Prize.

Then the paper pushed him to the assistant city editor’s desk where he supervised gangs of reporters for more than a decade. Finally, he joined the Cook County State’s Attorney’s office as the press secretary for head prosecutor Dick Devine.

Much of that life found its way into John’s debut novel. He’ll talk to us about that story and several true tales about our city, the people who made it tick, and the scribes who watched them do it.