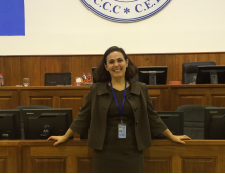 HEALING CAMBODIA:
An insider’s look at the unprecedented tribunal bringing the Khmer Rouge to justice and a country to closure

The Khmer Rouge governed Cambodia from 1974 until 1979, when the
Vietnamese Army forced the regime out of power. In less than four years, the brutal
regime under the Marxist dictator Pol Pot killed close to two million people, most of
whom were its fellow Cambodians – approximately a quarter of the country’s
population – by the execution, starvation, disease, and forced labor of the “killing
fields.” After 20 years of civil war the Cambodian government and the United
Nations established an extraordinary hybrid court composed of Cambodian and
international jurists and staff to investigate and try the senior leaders.

In 2015, 3750’s own Steffanie Garrett left her partnership at an elite Chicago
law firm to spend six months in Phnom Penh investigating what is believed to be the
second deadliest genocide in world history. There she found a unique legal
construct designed not only to prosecute but also to educate and heal a country still
devastated by the horrors wreaked 40 years ago.

Steffanie returned with a trove of insights into the successes and challenges
of the tribunal, and the unfortunate common threads that mark all genocides.
Don’t miss a talk as unique as its subject and its presenter.